In a normal eye, the light (the image that we see) will focus onto the retina, and the quality of this image depends on the balance between the length of the eye, corneal power and eye lens power; any change in the balance of these three factors will create a refractive error, which needs correcting. 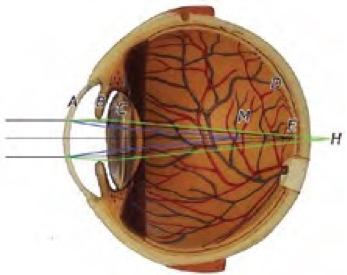 Figure 1: Eye model showing the cornea (A), the iris and the pupil (B), the crystalline lens (C), the retina (D). The most common refractive errors such as myopia (M) and hypermetropia (H) are shown compared to the normal (emmetropic) eye (E) where the images form exactly on the retina.

Most refractive errors can be corrected (or at least improved) by Refractive Surgery. This is a generic term, which comprises both Laser Refractive Surgery on the Cornea, correction by implanted lenses inside the eye called Phakic intraocular lens (IOL) surgery, or the replacement of the natural lens (either a clear lens or one with cataract ) with an intraocular implant – usually a multifocal implant to improve distance , intermediate and near vision.

We can change the shape of the cornea to correct the refractive error. In a case of myopia, the surgeon uses the laser to remove a circle of central corneal tissue to flatten the cornea, which then focuses the image onto the retina.
When the myopia is very high or when the cornea is too thin, laser may not be considered a safe option because the tissue removed may result in a weaker cornea (and a risk of developing keratoconus). In these cases, Phakic IOL surgery is a very good alternative treatment, provided that your eyes are suitable.
To treat hypermetropia, the surgeon uses the laser to change the shape of the central cornea to increase the focusing power of the eye.
To treat astigmatism, the laser removes tissue in an elliptical pattern transforming a rugby ball shaped cornea to a round football shape.

Laser refractive surgery can be divided into two broad categories: LASIK and SURFACE ABLATIONS.
In LASIK, a flap is lifted and the main laser reshaping is carried out under the flap whereas in SURFACE ABLATIONS, the reshaping is done directly on the corneal surface.
In LASIK, the vision recovers quickly and typically you should be able to resume your work and drive within 1-2 days. There may also be a mild discomfort lasting only for a few hours after surgery.
In SURFACE ABLATIONS, the epithelium (the outermost layer of the cornea which regenerates spontaneously every few days) is removed using different techniques (PRK, LASEK, Epi-LASIK, Trans-PRK). This is like creating a scratch on the eye surface but in a controlled manner. Then the laser excimer (exactly the same laser used for LASIK) reshapes the stroma, the underlying layer.
Surface ablations are initially more uncomfortable for the first two days compared to LASIK, and there is also a slower visual recovery which can take about five days but this procedure is ideal for patients with thin corneas or dry eyes and in those patients whose occupation or hobbies make it more dangerous to create a flap.
We use the latest method called Trans-PRK in which the epithelium is entirely removed by the laser and the eye is not touched by the surgeon. Trans-PRK tends to have a shorter recovery time and less discomfort than other surface laser methods (PRK, LASEK, Epi-LASIK).

Phakic lOLs are designed for people with high degrees of myopia that cannot be safely corrected by laser refractive surgery. These ‘Implantable contact lenses’ called Visian ICLs are implanted inside the eye in front of the crystalline lens and behind the iris. It is a very effective, safe and reliable procedure for suitable candidates.