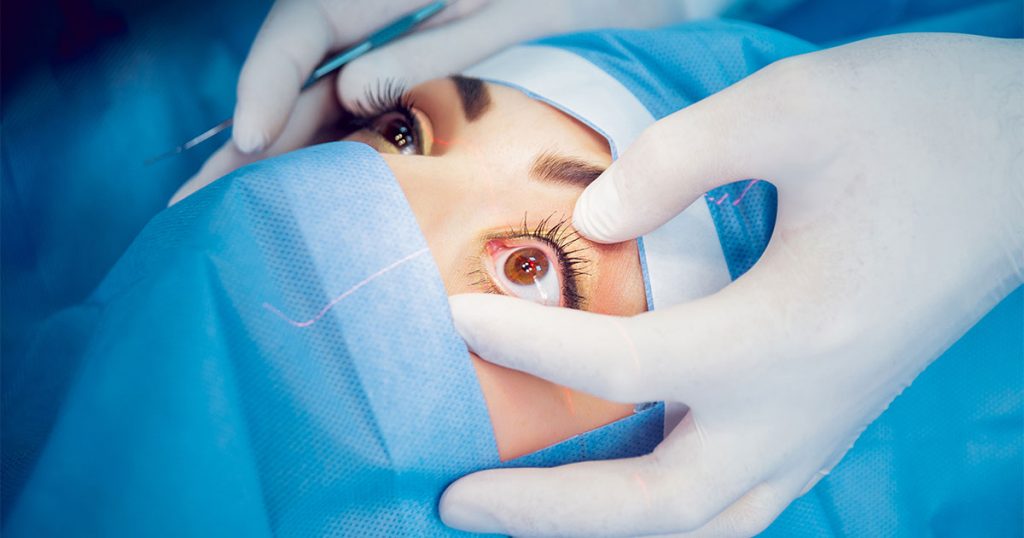 A laser iridotomy is generally performed either to lower the eye pressure in chronic narrow angle glaucoma, or to prevent and treat acute angle closure glaucoma (both of which can cause severe and irreversible vision loss if not treated). The treatment is only recommended if the risks to vision from glaucoma outweigh any risks from the treatment itself.

The procedure is done as an outpatient and it is best to have someone along to take you home, as your vision in one or both eyes might be poor for driving or walking, though it isn’t usually badly blurred. We can treat one or both eyes at one sitting. There is no extra preparatory medicine needed on the day before or morning of, but you should take any usual eye drops that were prescribed for daily use. After the preliminary exam, an eye drop of pilocarpine is put into the eye to make the pupil small and the iris thinner. This takes 15-30 minutes. You will get a sensation like sinus pressure, often felt in the eyebrow, and your vision can blur temporarily. The eye is numbed with anesthetic eye drop or ointment and a lens is put on the eye, held by the doctor’s fingers to keep your eyelids out of the way and to magnify the view. You will be sitting up at the instrument called the slit lamp with a chin rest and bright light shining from binoculars that the doctor looks through. You help by keeping the other eye open and staring straight ahead between blinks. It’s OK to blink, since the eye getting treated can’t close with the examining lens in place.

The most commonly used laser is the neodymium: YAG type, which treats the eye so fast that you won’t have a chance to move your eye during laser applications. When the laser fires, you get a sensation that something happened. It’s typically not unpleasant, just a little startling if the doctor doesn’t warn you first. We often need to make several deliveries of laser to produce a hole about one half a millimeter in size, about the size of a ball point pen tip. That’s all it takes to let aqueous flow from behind to in front of the iris and fix the problem. It’s pretty uncommon that you or someone else will see where the hole was made, though if you look closely you’ll later possibly see a black dot where it is. Because the laser is focused down to a point at the iris inside the eye, it doesn’t have concentrated power anywhere in the eye except there, so it doesn’t damage the wall of the eye or anything behind the iris. You won’t have a hole in the outer wall of the eye.

A small number of persons after iridotomy previously reported that they saw an additional line of light around street lights, or, that they see more glare in general. Even those who experienced this glare effect found that it goes away with time. Widely accepted locations for placement of the iridotomy such that the incidence of glare is minimized include at the 3, 9 or 12 o clock positions. Very rarely, debilitating glare may require an operation to close the iridotomy using a stitch.

For the first hour after iris hole treatment, vision is blurred, but it clears quickly. Half an hour after treatment the pressure is checked, since occasionally it rises substantially and needs treatment for a while with drops to make it safe again. No eye patch is used. Some eye surgeons give anti-inflammatory eye drops for a few days. The next visits are one day, one week and one month later. If the laser hole is not open at 4 weeks after the initial treatment, it is retreated, which is typically pretty quick and easy. Making a hole is harder in thicker, brown irises, such as in African- or Asian-derived persons. In these eyes, we can treat with two separate types of lasers in sequence, the first being a continuous wave laser (diode) to thin down the iris, followed by the neodymium:YAG to punch through. About one in ten times in this kind of patient it can take two sessions to make a full hole of the right size, and sometimes the iridotomy may have to be placed at any suitable location to minimize the much higher risk to vision from glaucoma.

Once a laser iris hole is made, it’s open for good. The iris doesn’t heal as do other body tissues, probably because the aqueous fluid that surrounds it contains chemicals that prevent healing under normal circumstances. The exceptions to the no-healing rule are eyes that have new blood vessels growing in them or eyes with inflammatory diseases (neovascular and inflammatory glaucoma). Because the normal situation of no-healing is changed by these processes, laser iris holes in those eyes can close up and are watched more closely.

There is some limited evidence that making a hole in the iris speeds the development of cataract, perhaps because the movement of aqueous is re-routed through the hole and doesn’t uniformly bathe the lens as it normally does. Of course, if the eye develops an acute angle closure crisis because the hole wasn’t made, a cataract is pretty much guaranteed to develop soon. An iris hole, on balance, may wind up preventing more cataract than it might cause if angle closure crisis is avoided.

Depending on the type of glaucoma, laser iridotomy may help facilitate control of the eye pressure, but you may still need to use glaucoma drops long term. In some cases further laser or surgical treatment may be required to control glaucoma, as the iridotomy may be one step in the long term management of the condition. It is important to remember that a laser iridotomy is not done to improve vision or to gain independence from glasses.