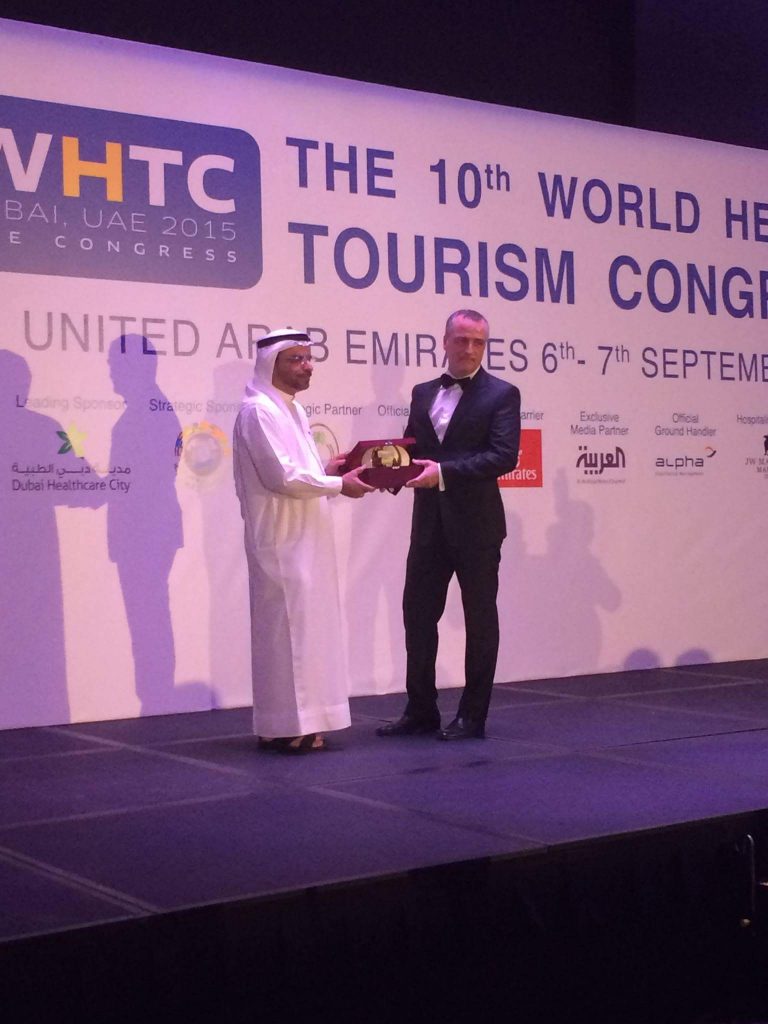 9 September 2015 (Dubai, United Arab Emirates): Moorfields Eye Hospital Dubai (Moorfields), the first overseas branch of Moorfields Eye Hospital in London, was the winner of one of the top awards at the 10th World Healthcare Tourism Congress (WHTC) 2015, held under the patronage of the Government of Dubai and Dubai Health Authority, on September 6th at the Mohammed bin Rashid Academic Medical Center in Dubai Healthcare City. Moorfields was presented with the ‘International Patient Care Team of the Year’ award for 2015.
The WHTC, in association with the Institute of Healthcare Research at Cambridge Academy for Higher Education, presented the award to Moorfields at the gala awards ceremony held on September 6th at the JW Marriott Marquis hotel in Dubai.
Mr. Mariano Gonzalez, Managing Director of Moorfields Eye Hospital Dubai, who received the award from His Excellency Humaid Al Qutami, Chairman of Dubai Health Authority, said: “It is very gratifying to receive this particular award on behalf of Moorfields Eye Hospital Dubai, especially because of its emphasis on patient care and teamwork. It follows on from last year’s awards success and I believe it reflects the quality of our growing team of consultants and medical staff, who ultimately deliver the expert treatment and compassionate care to patients. The award comes as we prepare to open a new facility in Abu Dhabi and as our patient base – local, regional and international – continues to grow.”
Since opening in Dubai in 2007, Moorfields Eye Hospital Dubai has treated more than 31,000 patients from more than 90 countries, as well as local and regional patients. Moorfields also puts a strong emphasis on research and teaching, which are part of the hospital’s overall mission.