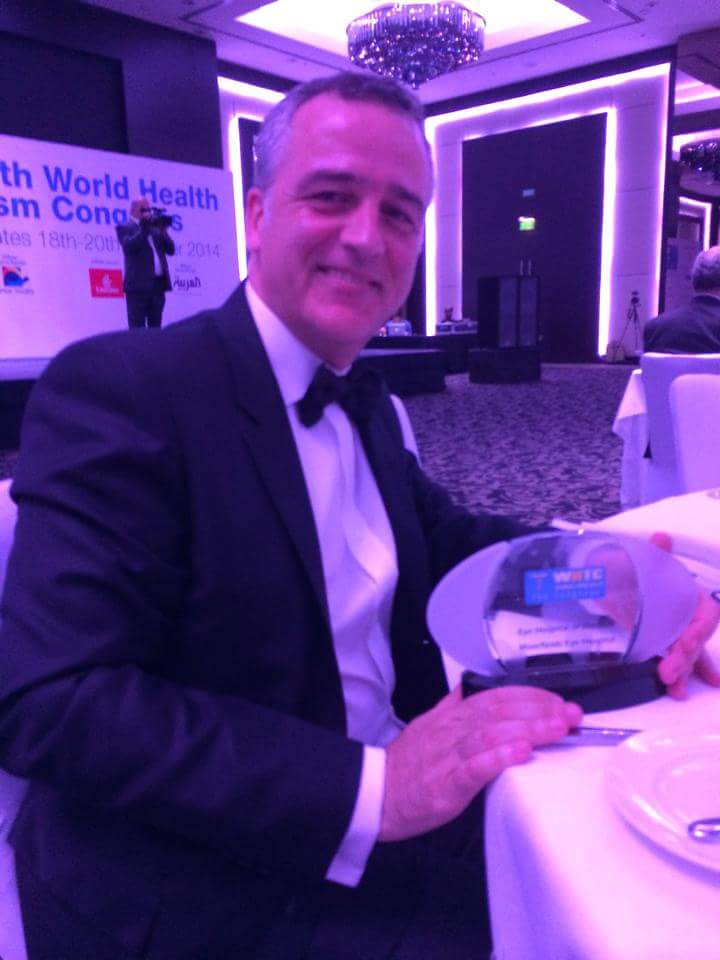 26 October 2014 (Dubai, United Arab Emirates): Moorfields Eye Hospital Dubai, the first overseas branch of Moorfields Eye Hospital in London, won one of the top awards – Eye Hospital of the Year – during the 9th World Healthcare Tourism Congress (WHTC) 2014, held on October 18-20 at the Mohammed bin Rashid Academic Medical Center in Dubai Healthcare City.
The WHTC, in association with the Institute of Healthcare Research at Cambridge Academy for Higher Education, presented the award to Moorfields at a gala ceremony held on October 19th at the JW Marriott Marquis hotel in Dubai.
Speaking at the awards ceremony, Mr Mariano Gonzalez, Managing Director of Moorfields Eye Hospital Dubai, said: “I am delighted to receive this award on behalf of the team at Moorfields Eye Hospital Dubai. The hospital continues to grow its patient base and we now treat thousands of patients from the UAE, Middle East and even further afield, every year. I believe we have validated Dubai’s belief that providing world class healthcare in a top quality destination, will attract patients from all over the world. Winning one of the top awards at the WHTC really is a testament to the skills and commitment of the entire Moorfields team in providing the best care and treatment to patients, wherever they are from.”
Since opening in Dubai in 2007, Moorfields Eye Hospital Dubai has treated more than 31,000 patients from more than 90 countries, as well as local and regional patients. Moorfields also puts a strong emphasis on research and teaching, which are part of the hospital’s overall mission.
“Operating our new state of the art hospital at the healthcare hub of the region has played a central role in our success,” added Mariano Gonzalez. “Ophthalmology is one of the key clinical areas on which Dubai is focusing its medical tourism efforts, so there is a natural link and Moorfields is committed to supporting efforts to develop medical tourism, as a partner to DHCC.”[:]